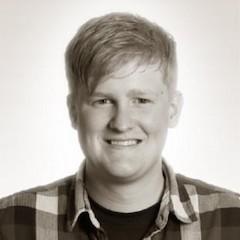 The strange and wonderful family of languages known as Concatenative Programming Languages had its golden era with FORTH in the 70s and early 80s, after which they largely faded from the mainstream. Relegated to being of interest for mostly academic and niche industry applications, we could question whether these languages still have a place in the mainstream programming world of today. But Concatenative Languages weren't only known for their weirdly syntax-free programs and keywords reminiscent of 90s eurodance anthems. They also came with a remarkable, ahead of its time, philosophy of programming. They had a way of approaching problem solving which followed naturally from the decisions made in the design of the languages. An approach that seems very compatible with the needs to iterate, tweak, and experiment that comes when doing creative programming. Let's take a fun little journey through the forgotten world of Concatenative Languages, guided by Creative Programming.

Stian Veum Møllersen is a web developer based in Oslo. He is a developer that actually enjoys CSS, makes prolog webservices for fun, and thinks prototypical inheritance was a really neat idea. He loves having fun with programming and exploring the weirder side of our crafts relatively short history. He is currently working as a consultant and Design Engineering practice lead at BEKK, helping organizations build large scale web applications.