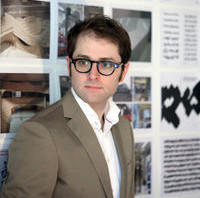 The talk will outline the development of custom software plugins for the realization of a sound diffusive surface pattern, 1,000,000 NURBS surface cells, and the fabrication of 10,000 non-standard acoustic panels for the Elbphilharmonie Concert Hall in Hamburg, a project 8 years in the making.

Benjamin Samuel Koren was born in Frankfurt and raised in Miami. He studied Architecture, Film and Music at the Architectural Association in London, NYU and the University of Miami. He worked at the Advanced Geometry Unit at Arup in London and Herzog & de Meuron in Basel. He also set up ONE TO ONE in 2009, a computational geometry and digital fabrication consultancy for art and architecture projects.