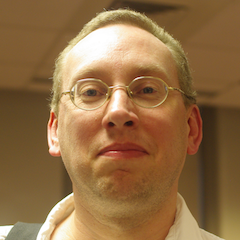 A Vision for Relational Programming in miniKanren

miniKanren is an embedded constraint logic programming language designed for writing programs as *relations*, rather than as functions or procedures. Unlike a function, a miniKanren relation makes no distinction between its inputs and outputs, leading to a variety of fascinating behaviors. For example, an interpreter written as a relation can also perform code synthesis, symbolic execution, and many other tasks.

- give an introduction to miniKanren and relational programming

- show interesting relational programs, such as a relational interpreter

- demonstrate the remarkable flexibility of these relational programs

- show the current limitations of this programming style

- Anyone interested in the long-term promise of very high-level declarative programming.

Will Byrd and Rob Martin guide the tutorial participants through concatentive programming - in some ways, the most functional of functional programming languages. Made up of only functions and compositions, concatenative languages are "point free" - no variables or named state needed. And we already use them every day. Forth, Postscript, even CPython and the JVM are based on concatenative principles of function composition and a stack. Imperative, highly efficient, easily optimized - concatenative languages are almost trivial. This tutorial works with a simplified language called Puppy, and is hands-on: participants will be both programmer and computer.

This workshop will cover the fundamentals of programming in miniKanren (http://minikanren.org/), an embedded domain specific language for constraint logic programming. We will begin with an overview of the miniKanren language, and will write a few simple miniKanren relations that "run backward." We will then write a more sophisticated miniKanren program: an environment-passing Scheme interpreter, written as a relation. We will extend the interpreter in various ways, and explore how the interpreter can be used for program synthesis.

No prior knowledge of miniKanren, logic/relational programming, or interpreters is necessary. Some exposure to Scheme/Lisp, or another functional language, would be helpful, but is not necessary.

William E. Byrd is a researcher at the University of Alabama Birmingham. He is co-author of 'The Reasoned Schemer', and co-designer of the miniKanren relational programming language. Will is also interested in molecular biology, nanotechnology, and the history of writing.